Since I've mentioned making these in recent FB posts, I thought I'd post the recipe.

For reference, this is the waffle iron I use. I turn it up to the max setting, and its indicator lights work pretty well, with the Bisquick version of this. If you swap the Bisquick for the substitute mixture, you get a denser waffle -- each one has more heft, and is chewier / less fluffy -- and you need to wait maybe 45-75 seconds past when the indicator light says it's done, to get something properly cooked through and browned. OTOH, maybe you like a lighter waffle, in which case the light will be fine...

Bisquick substitution: Bisquick contains hydrogenated oils, so some folks like to avoid it; I am told by folks who've experimented (including my dad and my older brother) that there doesn't seem to be anything else on the market that makes as-fluffy waffles; the industrial sifters and mixers can coat the flour granules with oil in a way that ensures they don't bind up and form a dense, gluten-y batter. However, the first time I made this, I used the substitute, and they were still, IMHO, pretty darn tasty. So, the substitution: One cup of Bisquick is more or less equivalent to a mix of one cup of flour, 1½ teaspoons of baking powder, ½ teaspoon of salt, and 1 tablespoon of oil. Mix up your not-Bisquick before the step where you combine it with the nut butter.

In blender combine 1/3 cup each of sunflower seeds, pecan pieces, and cashews. (You can mess around with substituting these; I actually did about 50% pecan, 35% cashew, 15% pine nut in today's batch.) Add 3/8c oil (ideally something like 50% canola / 50% some nut oil like walnut, almond, or hazelnut). Blend until well ground. Add 2/3 cup milk and blend in. Set aside.

Separate 4 extra-large eggs or 5 regularly-large eggs. (I have an egg separator tool, and I crack my eggs into a very small bowl, then drop the yolk in one larger bowl and dump the white into another -- and this saved me a lot of grief today, because I did rupture one of my ten yolks. If you get any significant amount of yolks into your whites, the whole batch will be ruined -- you can't get a stiff-peak meringue if you have yolk in there; some protein in the yolk messes that up.)

Add yolks to blender, and blend until smooth.

Mix egg whites with beater/whisk, until stiff peaks form. (There is really nothing that will do this as quickly and effectively as a KitchenAid stand mixer. I lurrrve my KitchenAid; I hadn't been using it a lot, the last few years, but then we've used it a bunch in the last couple weeks, doing waffles and cakes, and I remembered why I like it so much.)

Place 4 cups of Bisquick (regular, or low fat if preferred; or substitute previously described) into separate large mixer bowl. Dump in contents of blender. Rinse blender vessel with 2 cups of milk, adding that milk to bowl of soon-to-be-batter. Mix using paddle on a low-ish setting (start at the basic "stir" setting, and go no higher than about 4) until it generally comes together, forming a slightly lumpy batter (should only take about a minute).

Turn on waffle iron, so it will be fully heated as soon as the batter is ready.

Pull bowl out of mixer, add egg whites into batter gently with a rubber spatula -- don't stir, just fold the meringue down into the batter. Leaving clumps of meringue is fine, because next you shove back under mixer, re-attach paddle, and stir for another 15-30 seconds to fully combine. 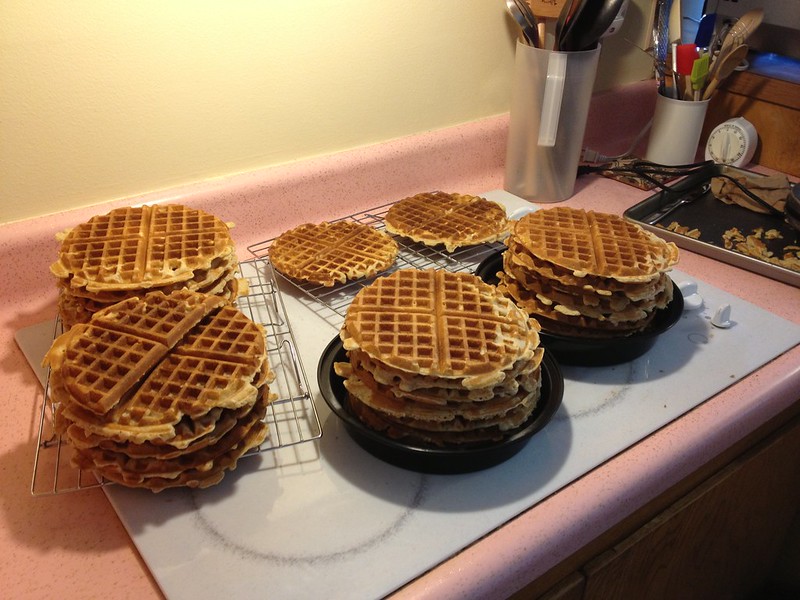 And here are instructions from my brother Greg on his variant, which has kind of a crunchy / granola-y texture, and is much faster to mix up.

Nut Mixture:
In a Cuisinart type food processor, throw together about one cup of whole oats, one cup of flax-flakes or similar stuff, two cups of walnuts, 1 cup of almonds, 1/2 cup of corn meal. Then I just turn the sucker on until it's evenly mixed and chopped into little tiny pieces -- not chunks, not plasma, just nice and grainy. Then I put the whole shebang in a jar and use it to mix up various things, including the waffles.

Waffles:
Take about 1 cup of the mixture from above, 1 cup of Bisquick (if you can find a no-hydrogenated-fats mix that works nearly as well, let me know; every "crunchy" substitute I've tried produces yechy waffles), 2 Tbsp. brown sugar. Mix dry ingredients until, you know -- mixed. Put in 1 egg, 3/4 cup of plain, whole yogurt, and then enough milk to make it the right consistency for waffle batter. If you're into a bit of oil, splash a bit of canola in there before whisking together. Let it "breathe" for a minute or two to make sure your consistency is what you want, then waffle away.

That's what I do anyway. Nothing to say that it's as good as it could be. Of course, I recommend all natural, organic, outrageously tree-hugging ingredients of every kind whenever you can get them. If you come up with improvements / fun variations, let me in on it.

One of the nice things about these is that you can make a ton of them -- we've been doing them in double batches, which gets even the big 6qt KitchenAid bowl alarmingly full -- and freeze what you don't eat that day; they're fine in the freezer for at least two weeks. Probably longer, but we always eat them all by then. :-)

To reheat, put them on a baking pan, covered with foil, and stick in a 375F oven for about 15 minutes, then pull the foil off, stick back in for ~2.5 minutes, flip over, stick back in for another ~2.5 minutes, then serve. This process of getting them warm in a way that keeps them moist (steamy, even), and then crisping them up on both sides, will bring them back to almost exactly the state they were in when they were fresh off the iron.
Subscribe

Is this the famous Mitch recipe?

Yes. My family got it from my mother's childhood friend Fred Gey.

My experience is that you can get pretty nice waffles with straightforward recipes if you make them with cake flour (which is low-gluten) and you don't over-mix them (which would increase the toughness).

I've had good results with http://www.seriouseats.com/recipes/2009/02/sunday-brunch-the-greatest-waffle-recipe-ever.html
Though I've generally made it with melted butter instead of canola oil due to wanting to avoid cooking with modern 'vegetable' oils. I really like to add some cinnamon to the dry ingredients, but not so much that it's the dominant flavor.