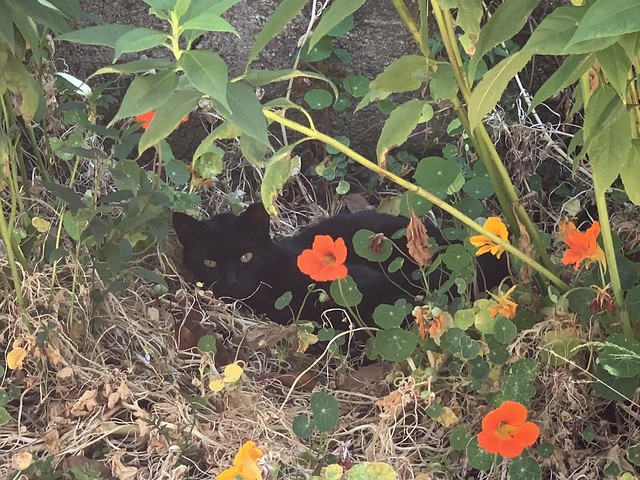 Nisshoku was born in a household with a cat hoarding problem. We have photos of him visiting our yard from as early as October of last year (see Plymouth's Rainstation Rescues album), and I had seen him and his siblings in the front yard of the house earlier than that. Eventually the hoarders were evicted, many of his kin were confiscated by the local PHS/SPCA, and he was left on the street. When we realized they were gone and there were several cats left with nobody taking care of them, we did our best to get everyone fixed, vaccinated, and re-settled. We caught seven cats, and our understanding is there were a few more, a Siamese with some kittens, who were caught by a different neighbor and just turned in to PHS.

The first month or so that we were feeding him he gained back some weight that he had lost with no steady source of food -- though that still left him at like 6.5 pounds. But after that he started to lose energy and spend more time sleeping. He still was happy to see us bring food, and would do these little jump-headbutts against your hand or knee, but he was clearly a bit slower than the other three cats who visit us regularly. Eventually he developed an eye infection, and we noticed him having a wet cough. When I took him to the vet, they concluded that he had some really bad health condition -- we're still not sure what the underlying issue was, most likely either lymphoma, or feline infectious peritonitis. (FIP is caused by an interaction of a genetic issue with a common cold type coronavirus. There's actually an experimental drug that was already undergoing testing for FIP, which has been pulled into trials for Covid-19, because the mechanism of action is similar, causing fluid to leak from blood vessels.)

We brought him indoors for a couple of weeks to treat the eye, hoping that keeping him away from the bad air quality would also help his lungs. Unfortunately it was difficult having him as an indoor cat, because if we didn't physically pick him up and put him in the litter about every two hours, he would pee in random places, which meant at night he had to be locked in the bathroom with absorbent pads. He did seem to get better for a bit. The eye infection cleared out. He was left with some cloudiness in his cornea, but he was able to focus with both eyes again. He was able to jump up on the counter to go after food, and he came and explored the bedroom and jumped up with me while I was working on the bed. When the air quality got better, we moved him back outside to an enclosure -- the little gazebo we used to use to have connected to a cat door, so Hoshi and Tsuki could sit outdoors at our house in San Mateo. He seemed to like being able to at least watch the birds and sniff the air. We were still concerned if we just let him out, when we needed to medicate him twice a day, he might start hiding from us at the medication times.

Unfortunately a few days ago he lost interest in food, and began rapidly declining. Two nights ago when we came out to try to bring him some food, and apply appetite stimulant to his ear, he came out of the enclosure and crawled right into my lap, whereas usually to give him medicine I'd had to grab him. (Although once the medicine was over, he was generally content to sit there, take a treat or two, and get pets and warmth.) He hung out there while his brother Gesshoku and their friend Taiyō wove circles around me begging for kibbles.

We kept him one more night inside the gazebo, because he was in no condition to protect himself from raccoons, and there seemed better than the bathroom. We let him out yesterday morning, and tried again to offer some food. He took a couple licks, but then toddled off through a hole in the fence. We were worried he might just go hide in a bush and expire, or get himself in trouble with a dog, but he came back in the afternoon and hung out in the yard for the rest of the day. Around 9:30pm when I went out to bring wet food, I found him collapsed just below the step outside the back door, unable to raise his head. I figured if he'd dragged himself there, maybe he was associating getting inside with being safer. We brought him in and tucked him into a basket with some towels, to keep him warm and as comfortable as we could. Eventually we put the basket in bed between us. He passed away some time after 1:30am -- Plymouth woke up to use the restroom in the small hours and realized he'd gone.

He was a sweet tiny thing, and made an excellent lapcat once he got over his feral spookiness. I wish he'd had more time. We've wondered if we should've just let him out earlier, but we did our best with the information we had. We'd been hoping that the treatment would buy him a few extra healthy months. At least he got to take one more lap around his territory, and then spent his final hours somewhere warm and safe. 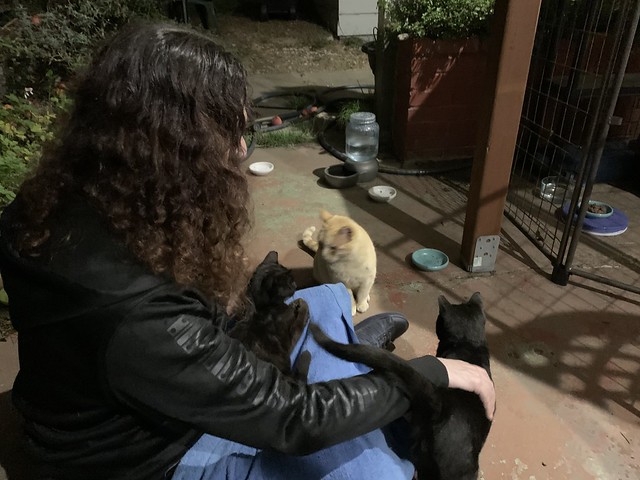